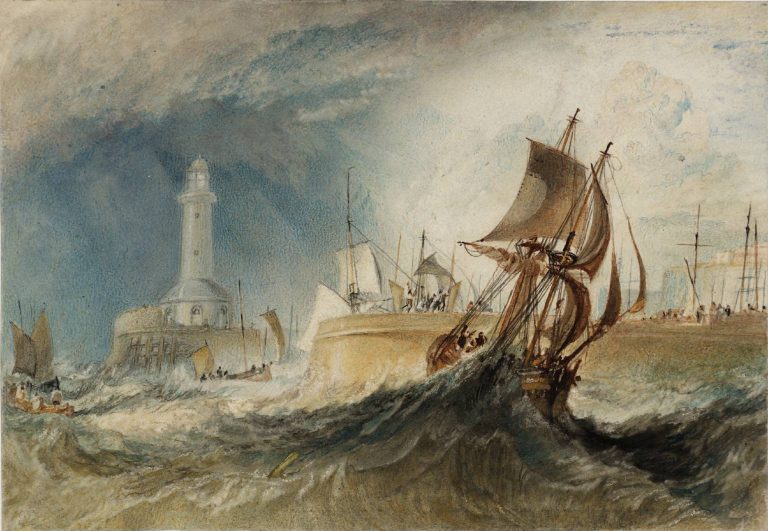 An exhibition of J.M.W. Turner’s original maritime watercolours and prints is to open in his former home in Twickenham on Saturday, May 22nd, 2021 thanks to a generous loan from Tate.

Turner’s English Coasts focuses on the artist’s engagement with English marine and coastal subjects at a pivotal time in his career when he was living at Sandycombe Lodge - the house he designed and lived in between 1813 to 1826, at Sandycoombe Road, St Margarets.

Guest-curator Christine Riding, , has selected works that underline the close relationship between Turner’s images of maritime Britain and contemporary print culture. The exhibition includes projects financed by professional engravers and publishers to those instigated by Turner himself. Some were commercially successful (the finished watercolours in the exhibition were and remain highly desirable to art collectors), while others were personal experiments. Crucially, it was through such projects - unprecedented in their breadth and quality - that Turner was to achieve an international reputation.

Turner painted the sea more often than any other subject: from the earliest paintings upon which his reputation was founded to his later experimental and contentious work, the sea remained central to his artistic vision. It also loomed large in British commercial, cultural and political life. As a maritime and island nation, there was a broad-based fascination with the ever-present risks of seafaring in a kingdom which boasts some of the most dangerous coastlines anywhere in the world. Furthermore, the Napoleonic Wars (1792-1815) encouraged domestic tourism, leading to British coastal towns and ports, particularly those on the southern coast of England, to be viewed increasingly as a mainstay of the leisure industry.

The contemporary vogue for marine subjects resulted in Turner’s monumental A Shipwreck (1805) being the first of his paintings to be engraved and published in 1807, the same year he acquired the land for Sandycombe Lodge. Encouraged by the commercial and reputational success of this venture, Turner embarked on a number of print-related projects that focused either exclusively on marine subjects, such as Ports of England, of which there are four examples in the exhibition and Marine Views such as Folkestone from the Sea. He also incorporated marine subjects into other series, for example the Thames estuary watercolours of The Rivers of England, an example of which is Rochester on the River Medway 1822, (see below). Castles, lighthouses and other coastal defences and landmarks were incorporated into compositions of great variety, thus melding artistic invention with a strong sense of place.

At about the same time, Turner embarked on an ambitious print project, the Liber Studiorum (circa 1806 to 1824), which he personally financed, overseeing every stage of production, and, as a gifted engraver, produced some of the prints. He also revisited earlier paintings as potential Liber images, such as Calm and Moonlight at Sea. One section of the Liber Studiorum was devoted to marine subjects. Turner would go on in the mid-1820s to produce a series of watercolours and mezzotints (a medium associated at the time with marine art) referred to today as the Little Liber, the majority of which are sea-related.

Turner’s English Coasts will be open to the public from Saturday 22nd May until Sunday 5th September 2021, Wednesday to Sunday 10am to 4pm. Prebooking is essential via turnershouse.org.

Join us for a late visit to our Turner’s English Coasts exhibition. Enjoy a glass of wine while discovering the great landscape painter’s country retreat and some of the his works on paper, made during the artist’s more productive period.

Turner’s English Coasts exhibition tour with House Director, Ricky Pound. Join our House Director for a special tour of the exhibition and find out more about JMW Turner’s relationship with the sea.