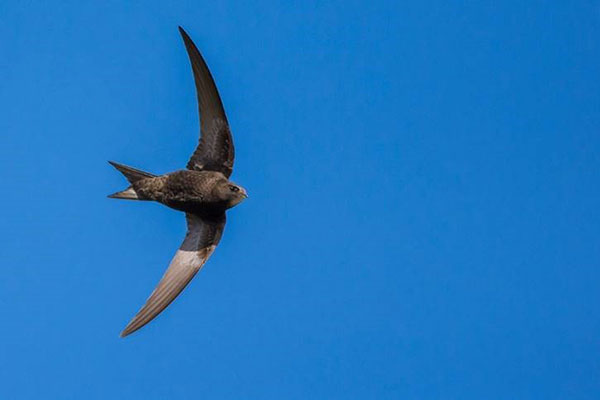 Residents are being encouraged to keep their eyes peeled for fallen swift chicks in parks and open spaces across the borough. During the recent cool and wet May, there was an increase in reports of casualties. Swift chicks can often be saved if the right treatment is applied quickly.

The Swifts Local Network (SLN) have released a document to assist residents or vets who come across or who may receive swifts and similar species of wild bird that have got into difficulty.

Swift populations have declined by 50% in the last twenty years. They are one of the species listed in the borough’s Biodiversity Action Plan. Swifts arrive in the UK in the last weeks of April and early May in order to breed, before leaving the UK in late July or early August to spend their winter in Africa, south of the Sahara, where they follow the rains and take advantage of rapid changes in insect populations.

A swift can be reliably identified by its scream-like call and its long crescent-shaped wings. The grounded bird may be otherwise healthy but unable to fly due to immaturity, exhaustion, temporary incapacity, or injury.

The Swift Conservation organisation offers guidance on how to provide ‘first aid’ to ensure the swift stays healthy before being taken into care.

Read the first aid guidance. Residents can also use the list of nearby swift carers to make contact with carers if they come across a chick.

“Seeing and hearing swifts while out in our parks and open spaces is always a delight of summer in the borough. The swift is a key species in the borough’s biodiversity chain.

“The recent cool, wet and windy weather has proved difficult for swift chicks. I would encourage anyone who comes across a fallen swift to read the guidance, take care of the chick and contact a nearby swift carer, if required.”

Local conservation charity Habitats & Heritage’s map sightings of swifts in the borough and are encouraging residents who come across swifts to email biodiversity@habitatsandheritage.org.uk and provide the coordinates of sightings. Residents can use the UK Grid Reference Finder website to find the specific coordinates.

As part of the Richmond Borough Biodiversity Action Plan there is a Swift Action Plan with actions that residents can take to support local swift populations. Read the plan.