Norwegian and other choral works by Ødegaard, Pedersen, Stockhausen, Havrøy and Daniel-Lesur

Ensemble 96 from Oslo is one of Norway's leading chamber choirs. Its field is contemporary a cappella music, and the choir has been critically acclaimed at home and abroad for both concerts and albums. Musical Director and conductor is Nina Therese Karlsen.

The chamber choir Ensemble 96 consist of 24 highly qualified singers, is one of Norway's leading vocal ensembles, and has gained its reputation through many critically acclaimed concerts, premieres and CD recordings. It has a particular focus on contemporary music and seeks to expand the traditional choir concert by means of collaborations with other artists, including dancers, actors and visual artists. The ensemble often presents a mix of contemporary music and classical songs. The musical director and conductor is Nina Therese Karlsen, who holds an MA in Choir Conducting from the Norwegian Academy of Music.

Ensemble 96's CD Immortal Nystedt, on the label 2L, was nominated for two Grammy awards in 2007, Best Surround Sound Album and Best Choral Performance. In September 2007 Ensemble 96 and its previous conductor Øystein Fevang received the Choral Award in Norway. The choir, with conductor Kjetil Almenning, represented Norway at the Nordic-Baltic Choral Festival in August 2008. The choir received a second Grammy nomination in 2011 for their CD Kind. It receives financial support from Arts Council Norway. 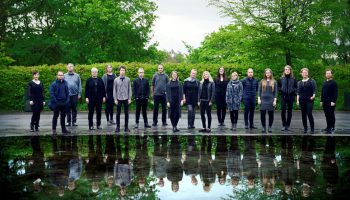