"The brilliant Endymion" (The Sunday Times) exists to deliver world-class performances of chamber music throughout London, the UK and abroad. It nurtures the UK's most dynamic and original composers, inspire younger and new audiences and champion mixed chamber music of all genres, through performance, commissioning, recording and promotion.

Since Endymion was formed in 1979 from a group of outstanding National Youth Orchestra students, it has built a secure reputation across a broad and often adventurous repertoire and won a strong following among audiences throughout the UK and abroad, touring in Ireland, Italy, Spain, Finland and Mexico. Unusually for chamber groups so well established, Endymion retains most of its original players. These performers now number among the best soloists and chamber musicians in Europe, including Mark van de Wiel, Stephen Stirling, Melinda Maxwell, Michael Dussek and Chi-chi Nwanoku MBE. Performing together for over thirty years, Endymion has been called one of the few chamber groups as much at home with Mozart as with Birtwistle.

Endymion has made a speciality of 20th century music theatre and chamber opera, including collaborations with the Royal Opera House's Garden Venture, Women's Playhouse Trust and Opera Factory, with which it undertook a European tour of Dido and Aeneas and Curlew River in 1995.

Endymion has appeared at most of the major British festivals, giving its tenth Proms performance in 2014, and was in residence at Blackheath Concert Halls for several years. Recent appearances at Wigmore Hall, Southbank Centre, Kings Place and at the Cheltenham and Spitalfields Festivals have included works by Kurtag, Simon Holt and Simon Bainbridge, premières by Vic Hoyland, Philip Cashian and Brian Elias and an Elisabeth Lutyens portrait concert. A retrospective of Anthony Gilbert's music featured a dozen especially composed musical tributes by distinguished contemporaries, including Birtwistle, Maxwell Davies, Alexander Goehr, Colin Matthews and Anthony Payne. Endymion's collaborations with the BBC Singers have included world premières of Giles Swayne's Havoc (Proms, 1999) and Edward Cowie's Gaia (2003), as well as the UK première of Birtwistle's Ring Dance of the Nazarene at the 2004 Proms ("startling virtuosity from all concerned" - Daily Telegraph).

In June 2009 Endymion celebrated its 30th Birthday at Kings Place with the Sound Census festival. Alongside a celebration of classical chamber music repertoire, 20 British composers were commissioned to write new works for Endymion. These were recorded for release by NMC Recordings. This disc will join a host of other recordings by Endymion including works by Lutyens, Stravinsky, Britten and Magnus Lindberg and (with the Dutton label) York Bowen, Edmund Rubbra, Thomas Dunhill, Lennox Berkeley, Erno Dohnanyi and Zdenek Fibich.

Endymion is committed to outreach projects with all sectors of society, through work with young children (RPS Award-nominated Sound Census project in 2009), aspiring musicians and adults with mental health difficulties (featured in the BBC documentary "I love being mad"). Music Teacher Magazine ran a profile of the Sound Census project, concluding it was "fearsome and spirit-raising in equal measure... proof of just what can be achieved at this level of music education".

In 2011, a major collaboration with EXAUDI vocal ensemble included performances at Southbank Centre, Sound Festival Scotland and Wigmore Hall, (where Endymion will be returning next year as part of the Wigmore series), the premieres of four new commissioned works by young British and Irish composers, and programmes focusing on Morton Feldman and Arvo Pärt. 2011 also featured Goodbye Stalin! - a three-day festival of chamber music by Shostakovich and Schnittke at King's Place - and the UK premiere of Elliott Carter's Clarinet Quintet.

In February 2014 Endymion celebrated its 35th Birthday at Kings Place with a weekend of concerts focused on Brahms chamber music for wind and strings, as well as a programme of music for flute, viola and harp. Two of these concerts were part of the "Top 50 Chamber Classics Unwrapped" series, presenting favourite works voted for by readers of BBC Music Magazine. A performance of Steve Reich's "Desert Music" with the BBC Singers in Milton Court, was repeated at the 2014 BBC Proms to great acclaim. 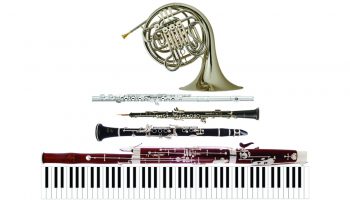